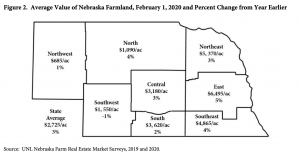 The report acknowledged that, “Reversing a half decade in market declines, the all-land average value in Nebraska for the year ending February 1, 2020 averaged about 3% higher than the prior year. Figure 2 [below] summarizes these figures and trends along with the percent changes over the prior year’s all-land average for the eight districts in the state.”

The report added that, “In 2020 the nominal (non-inflation adjusted) market value for the all-land average broke a five- consecutive year decline to improve to $2,725 per acre (Figure 3). The price of corn in 2020 declined to a Marketing Year Average of $3.20 per bushel.”

Also this month Mikkel Pates reported at AgWeek Online that, “Farmers have misplaced out on earnings as animal packers and ethanol producers crops have slowed or closed within the wake of the COVID-19 pandemic, in accordance with information from S&P Global Market Intelligence.

In a report launched June 29, the information firm and division of S&P Global, mentioned the pandemic has contributed to the truth that 2.68% of ‘total agriculture loans’ for banks have been delinquent as of March 31. This is the best stage for the reason that first quarter of 2012, in accordance with the report.

“As of the third quarter, banks held $179.52 billion in farm loans, according to the report, which does not list the Farm Credit System, a major player in ag lending. It does list John Deere Capital Corp. of Reno, Nev., as the largest U.S. bank by agriculture loans in the quarter, with $15.6 billion, up 6.1% in year-on-year growth.”

The AgWeek article identified that, “David Kohl, a professor emeritus of agriculture finance at Virginia Tech, was quoted in the report, saying bankruptcies are a ‘lagging indicator,’ and that bankruptcies caused by the coronavirus pandemic won’t show up for at least another year.”